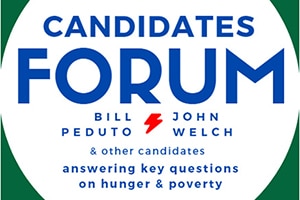 On May 16 there will be a contest in the local Pennsylvania Primary Elections for the City of Pittsburgh’s Mayor and one City Council seat, as well as for one Allegheny County Council seat and three Pittsburgh Public School Board seats.

Voters in these districts will need to make a choice in the Primary Election as to who will represent their party in the November 7 General Election for that seat.

Join Just Harvest and the Pittsburgh Food Policy Council at this non-partisan voter education event. Hear where the candidates for the contested Primary Election seats stand on key public policies affecting hunger and poverty in their districts.

Child care is available for this event upon registration. There will be street parking available or attendees can take Bus #41.

Darlene Harris (Democratic challenger) has not yet confirmed her attendance at this debate.

Terry Kennedy (incumbent, cross-filed as Democrat and Republican) has not yet confirmed attendance at this event.

Veronica Edwards (challenger, cross-filed as Democrat and Republican) has not yet confirmed attendance at this event.