By Just Harvest on December 18, 2019 in Commentary

Thirty years ago, before the term “food desert” was even coined, I spoke at a City Council hearing about the crisis of supermarket closings in our neighborhoods. Among the many neighborhoods affected by these closings back then were Larimer and Homewood, where supermarkets once stood on Frankstown Ave. – where the YCMA is now, and on N. Braddock Ave. – where today you can find the UPMC Resolve Crisis Center.

Once again today, Just Harvest stands here to remind Council that government needs to use its authority to support low-income people’s access to food, rather than to injure it.

The project this zoning would enable involves demolishing a supermarket and replacing it with one about 2/3 the size. According to charts presented by Giant Eagle at a public meeting in September, inside that smaller space, Giant Eagle would add beer and wine sales, bar seating for 18, café seating for 44, and a Starbucks. In contrast, retail floor space for fresh produce would shrink by 15%.

Furthermore, the proposed development would leave these communities without a supermarket for an estimated 18-24 months until the new store re-opens. During that time, it is essential that Giant Eagle and Echo Realty provide community residents with a viable, zero-cost transportation solution that will preserve their ability to do their grocery shopping. 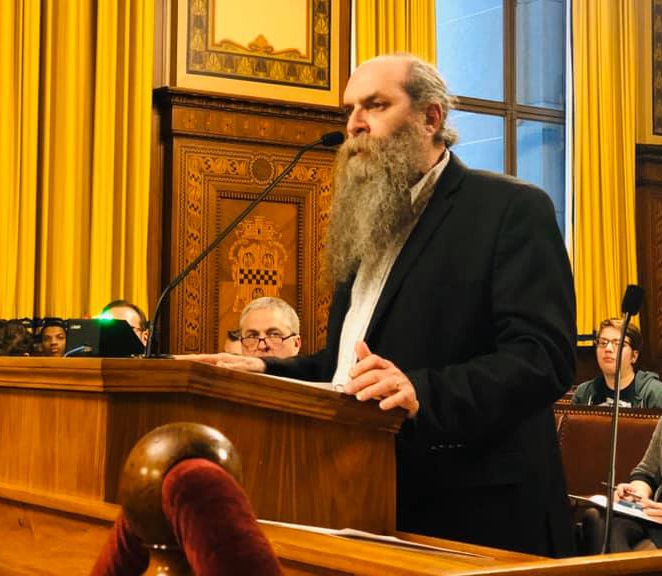 Click to view the video of the hearing. Ken’s remarks begin at 30:12.

In general, the City Council should deny zoning changes that reduce access to good, healthy food. In this particular case, the Council should insist on specific commitments to preserving the healthy food floor space and interim grocery transportation access solutions as conditions of any future zoning approval.

Nearly 5,000 households in the 15206 and 15208 zip codes currently rely on Food Stamps, and roughly 400 WIC recipient families depend on this store as the only viable place to obtain the high-nutrition foods provided by the WIC program.

Just Harvest stands in solidarity with today with our allies in the movement for equitable development, affordable housing, and sensible and sustainable mass transit. We support the conditions that they also advocate today as a prerequisite for action by City Council.

Section 922.05.F of the zoning code provides that one of the criteria for review of proposed zoning amendments is “the convenience and welfare of the public.”

The public is counting on you today to protect and defend their convenience and welfare by postponing action on this amendment unless and until these conditions are met to ensure real benefits to the broader community.

Thirty years on, it’s about time.