This post is adapted from the version originally published on Coalition for Human Needs’ website on July 11. 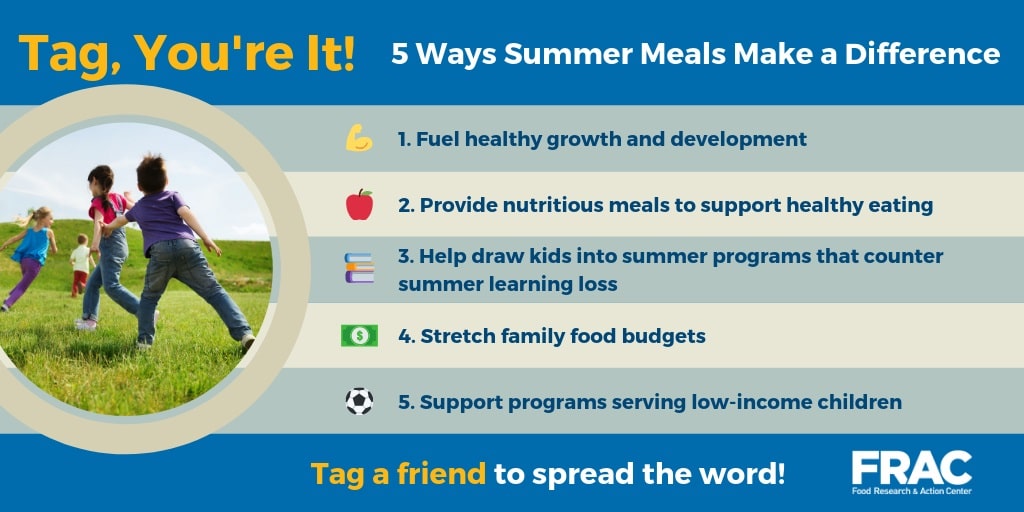 It is summer time for schoolchildren, and the living is easy – unless you don’t know where your next meal is coming from.

A new report released July 10 by the Food Research & Action Center (FRAC) found that far too many children across the country are missing out on the nutrition they need when the regular school year ends, and with it, the National School Lunch Program and a sister program that serves breakfasts.

The report, Hunger Doesn’t Take a Vacation: Summer Nutrition Status Report, found that 2.9 million children, or only one in seven of the low-income children who participated in school lunch during the 2017-2018 school year, received a summer lunch on an average weekday in July 2018. Even fewer children – 1.5 million – ate breakfast at a summer meals site in July 2018. Worse, FRAC research shows that summer meal participation has been steadily dropping since 2014, even though more children are now eligible for them.

“Low-income children miss out on more than just food when summer meals are not available to them,” said Jim Weill, President of FRAC. “Many summer meal sites offer educational and enrichment programming, which, combined with meals, helps reduce food insecurity and summer learning loss for children.”

FRAC’s goal – which the organization calls “ambitious but achievable” – is that 40 children have access to summer meals for every 100 children who receive free or reduced-price lunch during the regular school year. So far, examining the 50 states plus Washington, D.C., not a single state is meeting this goal, although D.C. comes closest; in July 2018, it served summer meals to 34.5 children for every 100 low-income children receiving free and reduced-price lunch.

Three states made the most progress in increasing the number of children served – Arizona (18.2 percent), Kentucky (15.1 percent) and Oklahoma (14.9 percent). However, Kentucky and Oklahoma were among the states that had the furthest to climb – they were among the 14 states that served summer meals to fewer than one in ten children who received meals during the regular school year.

Pennsylvania, however, moved backwards in providing children with summer meals; that number fell by 4.4 percent (to 14 percent). Philadelphia is reaching a far greater portion of eligible children, though still isn’t meeting FRAC’s goal of 40 percent. And Pennsylvania’s overall ranking of 28 hasn’t changed (1 being best), leaving it solidly in the middle with an overall performance that’s just about average. But again, the U.S. average (14.1 percent) is another step backwards for hungry children, as overall summer meals participation fell last year by nearly 6%.

The FRAC report notes that there is an economic benefit to states that work to increase the number of children they serve. Summer nutrition programs provide federal funding to states and the more children the states feed, the more money they get. That most importantly helps the children, but it also adds money to the local economy.

For every lunch that an eligible child did not receive in 2018, the FRAC report found, the state and community missed out on $3.86 per child in federal Summer Food Service Program funding. That means many millions of dollars were left on the table. If every state had reached the FRAC goal of 40 percent of eligible children participating in Summer Nutrition Programs in July 2018, an additional 5 million children would have been fed each day. States would have collected an additional $425 million in child nutrition funding that month alone.

The report’s release could not be more timely – Congress currently is debating the Child Nutrition Reauthorization, and FRAC has proposed ways to increase participation in summer meals. FRAC’s suggestions include allowing communities with substantial but less concentrated poverty – often in rural and suburban areas – to provide summer meals; reducing red tape by allowing sponsors of meal sites to provide food year-round through the Summer Food Service Program (rather than operating this program in the summer and another during the school year); and allowing all sites to serve three meals a day – currently only camps and sites serving migrant children can serve three meals.

You can download a PDF of the FRAC report here.

Get info on how to find a summer meal site near you.

David Elliot edits the Coalition on Human Needs' blog, Voices for Human Needs. He has 20 years of experience engaging in communications advocacy in the nonprofit world. He served as communications director for the National Coalition to Abolish the Death Penalty (2001-2008); for USAction (2008-2013); and most recently for Fair Share, a part of The Public Interest Network.
View all posts by David Elliot →
Power of the Pen participants submit public comments to keep immigrant families together
Trump administration’s “categorical eligibility” proposal will drastically cut SNAP access